The Darling Buds of May

The Red Shoes - my take on Mary Gail from the Scarlet Letter is back from the framers and although the store's choice is limited I am pleased with the frame. Stitched over two on 40ct Havana with AVAS.

"You have always had the power my dear, you just had to learn it for yourself" from the Wizard of Oz hence the red shoes.

However, I always like to personalise my samplers with something relevant to me at the time of stitching her.

We have had some difficult issues to deal with in 2015 and Ray being by my side holding my hand has enabled us as a couple to dance to the music of time.

The sentiment I chose was

Mary Hurst the 2015 group learning project for Our Scarlet Letter Years is continuing to grow and Section 5 has now been completed.

I have just started the sampler Martha Allis 1770 which is one in my private collection. It has been reproduced by The Scarlet Letter

I am using LL 36ct Vintage Light Examplar and AVAS.

The moment I saw Martha I had to have her for my collection but I learnt the hard way and just missed out on her at auction as I had left a commission bid. Luckily I traced her to Witney Antiques after the sale and managed to secure her. 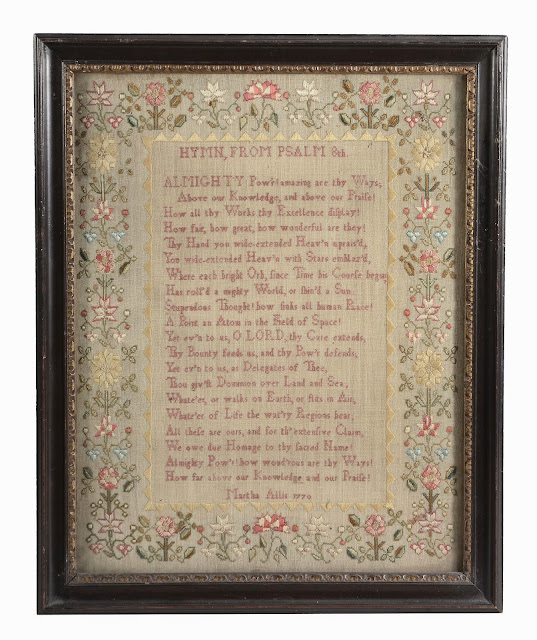 Martha's history is fascinating and I had much enjoyment researching her both online and in the records office.


On the 16th of June 1755 Martha Allis daughter of Quakers - John and Anna Allis was born in Shadd Thames in the Parish of Saint John’s in Southwark.
George II sat on the English throne and Samuel Johnson’s first  dictionary had just been published.

Martha was descended through her maternal line from Merchants who had escaped religious persecution in Europe in the beginning of the 18th Century and settled in London.
By the time that Martha was born Quakers had been able to practice their religion in England openly for sixty odd years and during this time had begun to be recognized for their integrity in social and economic matters. Many Quakers went into manufacturing or commerce as previously  they had not been allowed to earn academic degrees.
At the same time Quakers were also becoming more concerned about social issues and becoming more active in society at large. One such issue was slavery, another issue that became a concern of Quakers was the treatment of the mentally ill.

They also believed in the spiritual equality of women, who were allowed to take a far more active role than had ordinarily existed.

We can expect Martha’s family to have be hard working, affluent, religious and charitable. Martha and her mother would have been equals with her father and brother. Martha would have received an education.

In the 21st century Shad Thames is a historic riverside street with Tower Bridge (built 1886) at its west end and running along the south side of the River Thames in London. At the time of Martha’s birth it was described as:-
Shad Thames – exhibits an uninterrupted series of wharves, warehouses, mills and factories, on both sides of the narrow and crowded roadway. The buildings on the northern side are contiguous to the river, and in the gateways and openings in these we witness the busy scenes and the mazes of the shipping which pertain to such a spot. “
It was a major area for brewing beer which could be transported easily across the river to the City.

Martha’s father John Allis and Hagger Allis were brewers at Horslydown Old Stairs and were listed in “The New Complete Guide to All Persons Who Have Any Trade or Concern City of London” issued in 1770 the year that Martha stitched her sampler.

It is interesting to note that the famous English brewing company Courage was founded by John Courage in 1787 following his purchase of John and Hagger’s brewery for the sum of £616.13.11d paid by cheque on December 20th 1787.

On April 18th 1780 at the late age of 25 Martha married Nathaniel Hartland at the Friends Meeting House at Horslydown London. 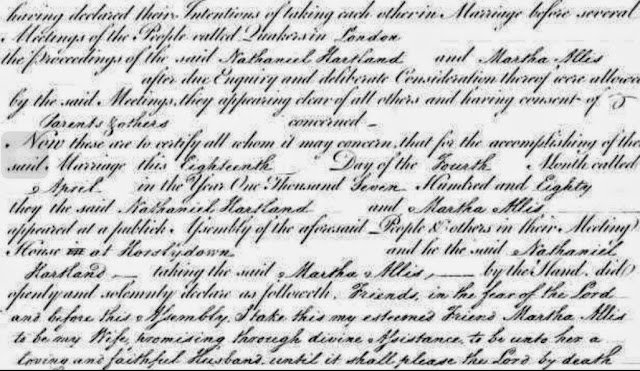 The Hartland and Allis families were closely interconnected with numerous marriages between cousins in generations before and after Martha and Nathaniel union and we can presume that they grew up knowing each other.
Nathaniel and Martha Hartland lived in Church Street Tewkesbury which overlooked the Abbey (see plan of area by Nathaniel in 1807) 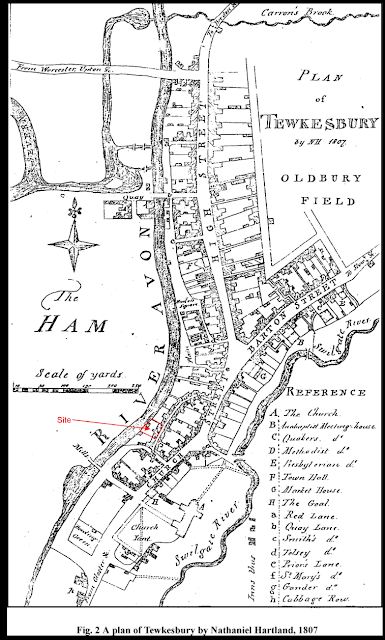 They had eight children - John Allis, Reeve, Anna, Nathaniel, (No Given Name), Nathaniel, Sarah and William.
Their last child William was born on September 15th 1797 in Church Street Tewkesbury. 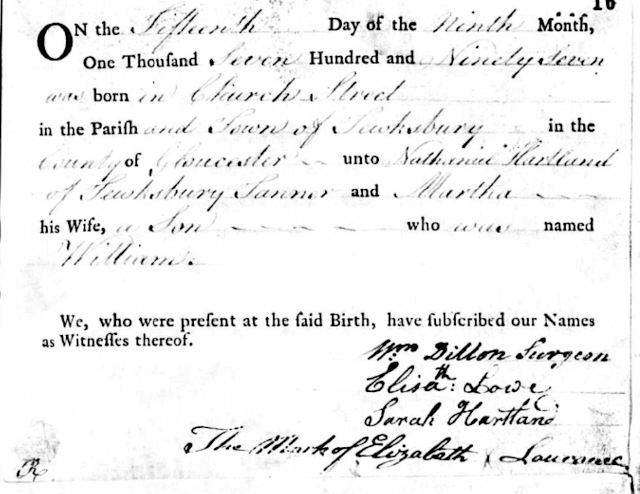 Martha died the same day as giving birth to William at the age of only 42 and her baby William 3 months later.

The Friends Meeting House in Tewkesbury 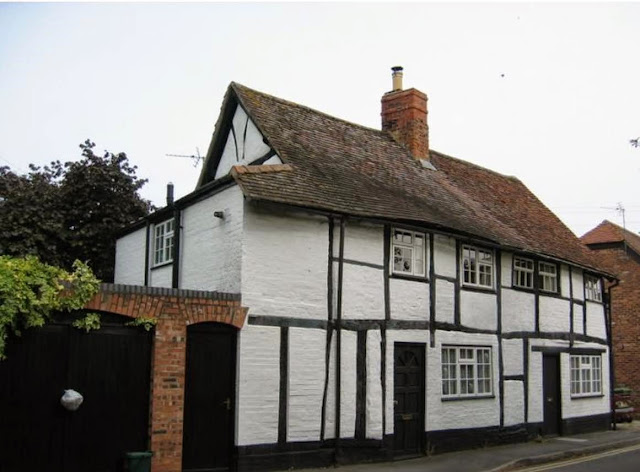 In 1803 Nathaniel married his second wife, Rebecca Wilkins, in a Quaker ceremony in Cheltenham. Nathaniel went on to found a bank in 1809 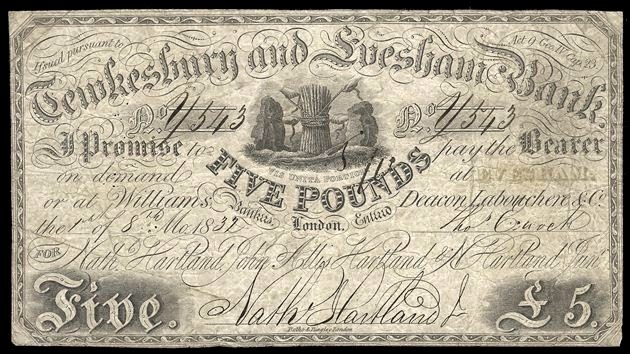 Nathaniel died in 1830, and in the following year his eldest son John Allis, a banker like his father, was married at Tewkesbury Abbey. His bride was his first cousin, Anna Maria Allis, daughter of Martha’s brother Jacob Allis.
Martha’s sampler probably passed on Nathaniel senior’s death to his son Nathaniel junior who also followed his father into banking. He was married twice, first (in 1816) to Ann Summers Harford, daughter of Ebbw Vale Iron master Richard Summers Harford. Nathaniel and Ann had a son, Alfred Harford Hartland, born in Worcestershire in 1817. Ann must have died in childbirth, or shortly afterwards: she was buried at Evesham in 1818, aged 24.
Nathaniel junior married his second wife Eliza Dixon, daughter of physician Thomas Dixon and his wife Sarah, in Evesham, in July 1825. Nathaniel and Eliza had five children: Theresa Gales, born in 1827; Frederick Dixon, 1830; Emily Rosa, 1834; Anna Louisa, 1842; and Ernest, 1843. The first three of these were born in Evesham, the last two in Charlton Kings, near Cheltenham, where the Hartland family can be found living – at ‘Oaklands’, together with half a dozen servants –  in 1841, 1851 and 1861. 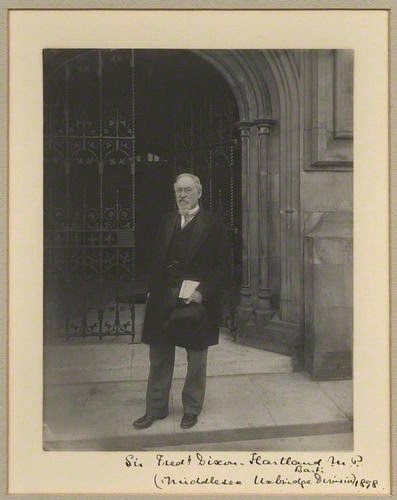 It is recorded on the reverse of Martha’s sampler that it passed in June 1920 to Anna Louisa Coulson nee Hartland, Sir Fredrick Dixon-Hartland’s sister and her Granddaughter.
Anna had married Walter John Coulson an eminent Harley Street surgeon in 1862 but they had no children.
In 1921 at the time of writing her will it is recorded that Anna was staying  at Ridgebourne on the Hergest Estate in Kington. Hergest was the home of her sister Emily Rosa Banks nee Hartland.
Anna’s will and subsequent codicials left many bequests but the bulk of a considerable fortune including furniture and personal effects went to two spinster nieces – Maude Ethel and Mary Constance Coulson.
They in turn left their estates to the same nieces and great nieces and it is believed that the sampler passed into the ownership of Margaret (Peggy) Balliol Scott who became a Beagley upon marriage.
Peggy Beagley died in 1996 in Mersham Kent.
The sampler reappears when it is sold at Auction in 2015 by Dreweatts in Newbury and was purchased by Joy Jarrett of Whitney Antiques.
I hope you have enjoyed finding out more about Martha and her sampler's journey down the generations.
I hope Martha Allis will now stay with me at Trewoon for many decades to come where it will be love and admired every day.

I like to use my blog as a journal to record positive things in my life at Poldhu Cove, however, I do not feel that I can overlook a very sad event in my life - the saddest yet - the sudden unexpected passing of my darling "Daddy".

He was the bestest of fathers to his three girls and a loving and devoted husband. Not forgetting a wonderful son to his mother. He lived a long and honorably life and was much loved and respected by his family and friends. 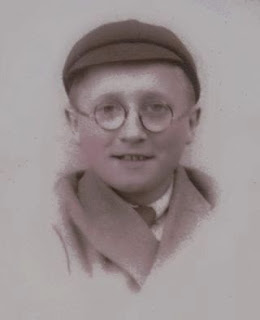 He never changed from a little boy

to the last photo taken by me two days before he had a massive stroke.

Ray striking a solitary figure at Porthleven whilst I had fun with the panoramic feature on my phone. 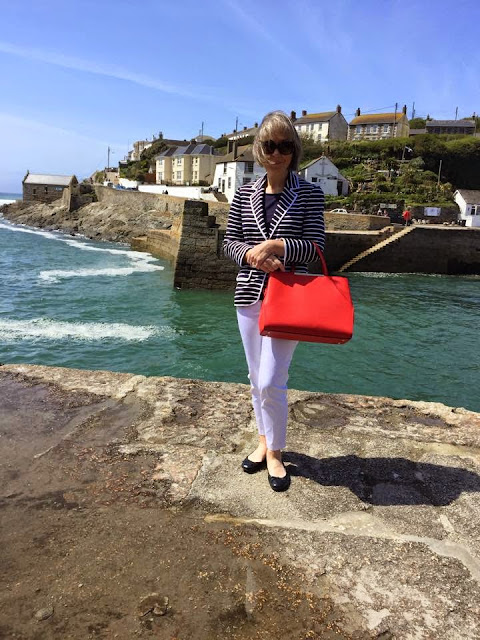 Porhtleven is very "foodie" and a delicious meal is always had when we visit with a walk around the harbour afterwards to burn off some calories. 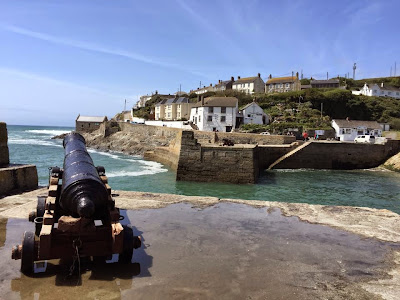 It was a beautiful day. 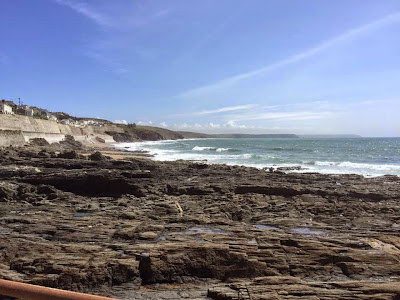 This is the same scene but in different weather. 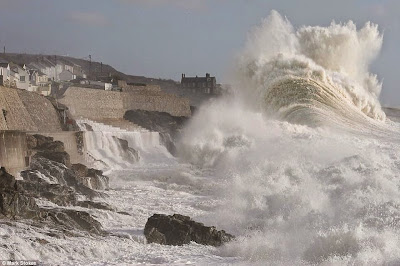 I recently received a photograph from our cottage agency of Trewoon which they took with a drone. It shows our setting perfectly. 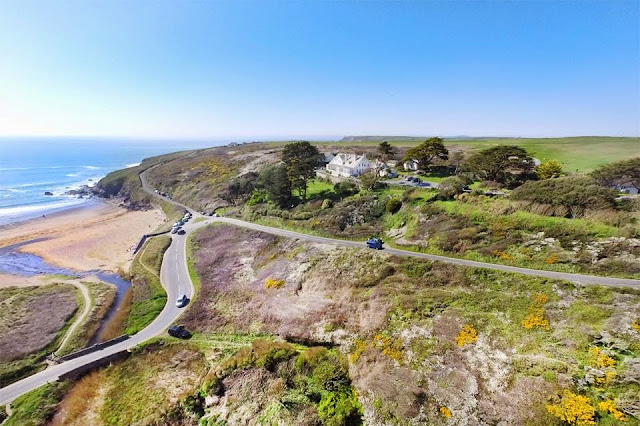 Modern technology is quite amazing. Here is a link to a video of the beautiful Kynance Cove taken from the air. This is a a short distance from our home and a favorite walk of ours.


We are so blessed with our coastline.
Posted by Nicola at 16:38