Dull November brings the blast, Then the leaves are whirling fast

I am really pleased with progress on this sampler and adore the colours. I like stitching borders and it has occurred to me that it has been a long time since I have done so, curiously my last series of projects Victoria Samplers Alphabets, Scarlett Letters' Ann Medd, And They Sinned & Dutch Beauty do not have borders. I am certainly making up for that lack now.

I hope to finish the bottom of the third panel tonight and I will then be moving onto the specialty stitches and filet panels. I have a problem with the filet panels as I have been unable to source the required coton a broder 16 and 25 in a suitable colour in the UK. I have never stitched with this type of medium before so I am a bit stumped for alternatives. Can anyone help with advice.

I am finding lots of little errors but it is not taking way my enjoyment.

I thought that it may be useful to others to have  list of further corrections I have found whilst stitching Blue Ribbon. I may have misinterpreted the charts so please make our own mind up when working this sampler. I have an official 4 page list of other corrections for anyone who wants a copy

.
Page 58 in addition to the correction  already noted, on the fourth border the second flower bud has three stitches missing.Page 60 satin stitch border to the left stitches omitted from the chart near start of fourth borderPage 60 fifth border, third flower vine from right, stitch missing, stitch same as all other vines.
Page 61 fourth band omit last two stitches at the end of the vine to balance with left end.

Page 62 second band first two vines on left stitch as the others, add one stitch on the right hand side end of vine to balance, there is room with the border.Page 62 third band middle upper flower vine omit double row, should be same as the rest of the band.
Page 62 fifth band omit two stitches on base of first flower to match second and third flower.
I will update this list as I go.


I am really enjoying the SDW Sampler SAL and am very pleased with progress after two Saturdays spent stitching. It has been great fun sharing this project with a fantastic group of pin pals. We have all had some trouble with the blackwork panel at the top. The thread has not been laying well on the 36ct. I have bought some AVS Paris which does lay better but I am going to leave the panel until the end.

I have been pondering about changing this panel completely and am torn between stitching true to the original or personalising my sampler.

I have been admiring some samplers on Scarlett Letter's web site which incorporate  cutwork and drawn thread work and have an urge to do the same on SDW.  I dont' have to decide for sometime yet!

Back in the summer I purchased two books:- 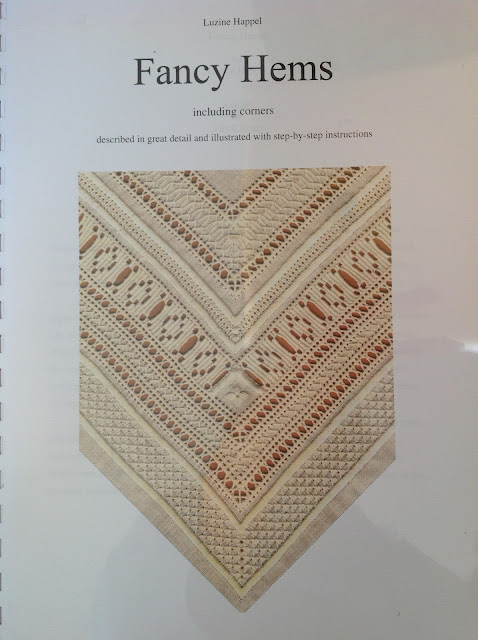 This is a very useful book with good instructions and diagrams. For anyone interested in drawn thread work this is well worth putting on your Christmas list. I bought the book directly from Luzine the author and she was delightful to deal with. 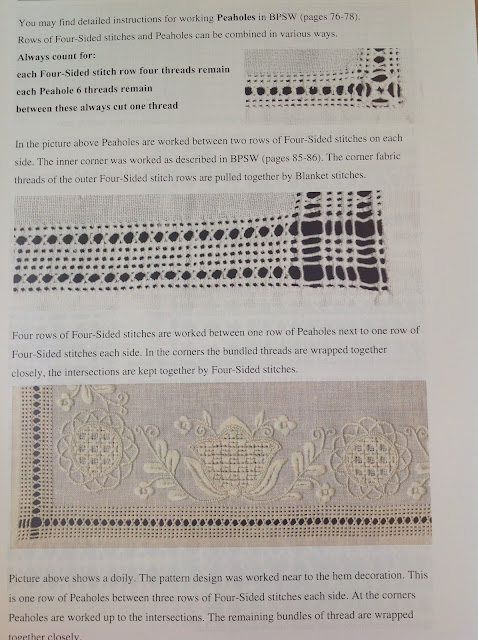 I also treated myself to:- 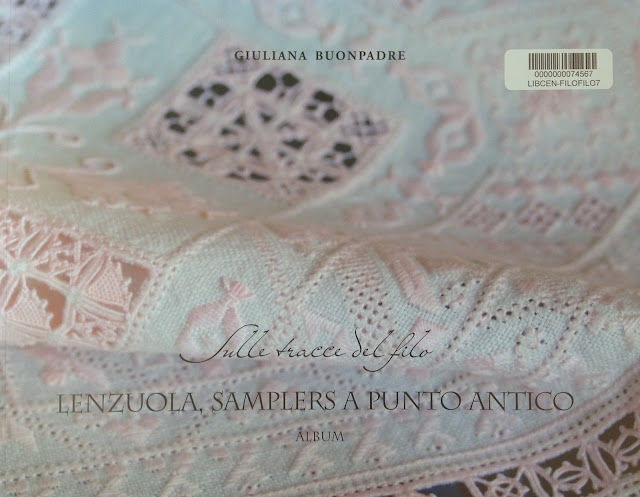 The work and linens featured took me back to my Noona's home in Italy. There are some really  gifted needlewomen who create such amazing heirlooms.

The week has passed very quickly, we had good news from the ophthalmologist on Thursday with Poppy's eye and then late on Friday afternoon she hurt her cruciate ligament again! Our vets are marvellous and they have kept in touch over the weekend. She spent yesterday medicated with painkillers and anti inflammatories asleep on the sofa in front of the fire. She is able to weight bear on the leg today but is still in a lot of pain. I think that a decision will be made tomorrow or Tuesday if they have to operate. They already have recent scans of the leg and I hope that with rest in may improve. Poppy is having an awful year.

It has been a mixed week weather wise.

We have had some very interesting cloud formations. Lots of strong winds, hailstones, vertical rain but then we have also had crisp sunny days.

We took advantage of one to pop over to the boat to check the ropes after the winds.

It could have been a summer's days.

My DH walking down the ramp onto the pontoons.


There was a super little sports car parked up on the jetty.

When I started writing this post the rain was coming down horizontally being driven in by the strong wind off the sea, now the sun is out and beams of light are falling across the desk. I think I will take Blue for a run around the gardens before the next rain starts. I will have to creep out so that Poppy doesn't spot us.