Happiness is a state of activity


Happiness is a state of activity and I have certainly been active this last week.


(Please excuse the poor quality of the photograph, I have yet to get all my photographic equipment back out)

I am so pleased that I have finished the third row “M” to “R” of Victoria Sampler’s Alphabet series, only one more row to go. I had to put my stitching away for several months whilst caring for my MIL and it has been a joy to pick up my needle again. 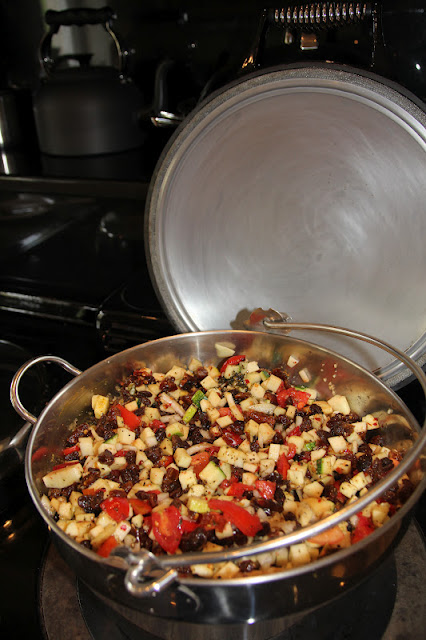 I have been busy baking and making two batches of chutney, I have had lots of garden produce to use up. We have had  a bumper crop of apples this year. 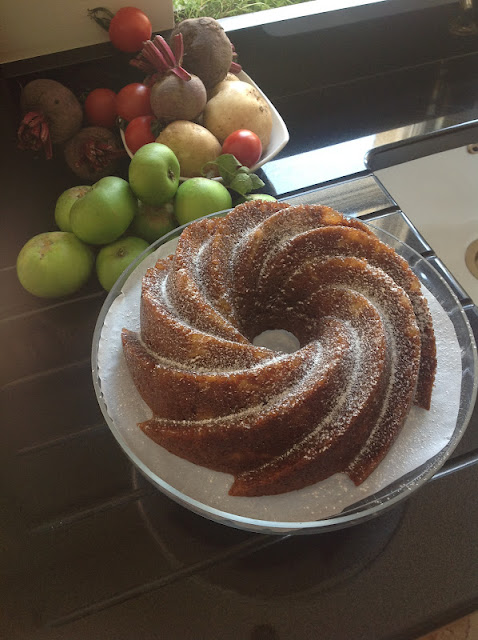 I treated myself to a bundt pan and have had fun experimenting. The first cake I made in the tin was a spiced apple and ginger which was scrumptious. It then occurred  to me that the shape was very much like a Terry’s chocolate orange so I played around with a marble cake receipe from joyofbaking.com and made a chocolate orange cake. This was a big hit with everyone here. 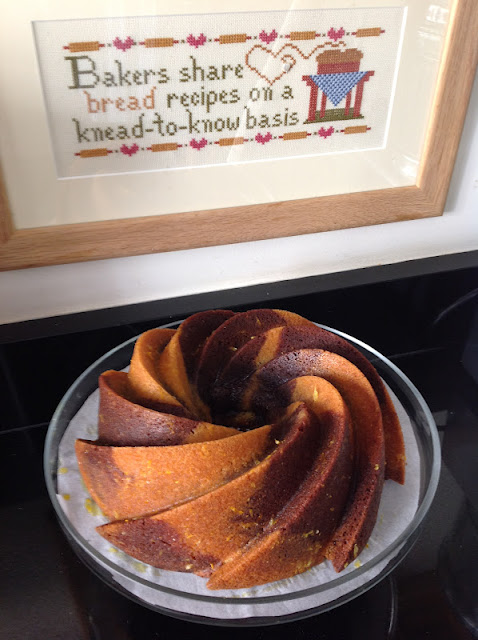 Joyofbaking.com is well worth checking out. Her recipes are very good and I like watching the videos before baking the recipe. 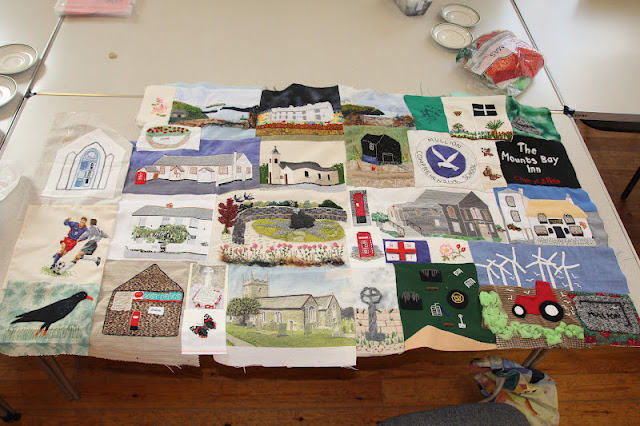 I went to the WI last week and the wall hanging of scenes from our village is progressing well. 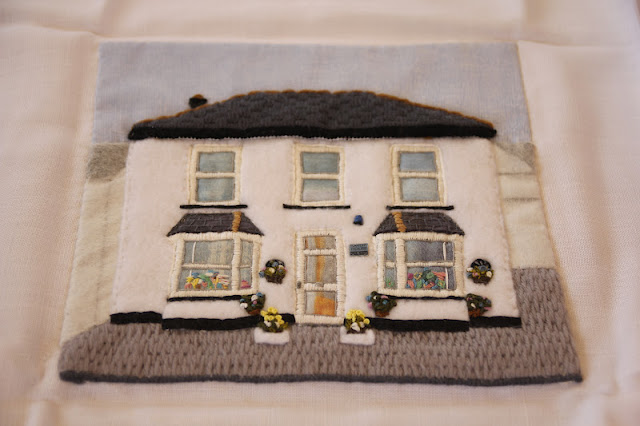 This is a new contribution which I though was very well executed. 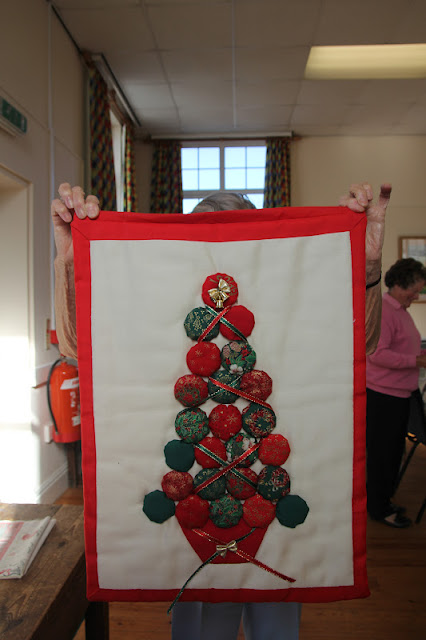 Frazer brought in some Christmas projects and I particularly liked this one.

I have decided to stitch Ruth Hanke’s Millenium Angel as my Christmas project for this year. I have placed my order and await delivery. Ruth is a very gifted designer.

My DH has planned a huge bulb planting programme for this winter, over 15,500 bulbs – daffodils, crocuses and bluebells. 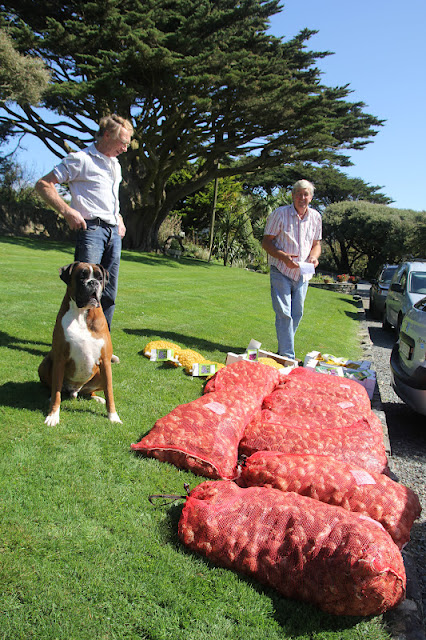 The first of three deliveries came in the week and the gardeners have made a good start with the help of Blue and Poppy. 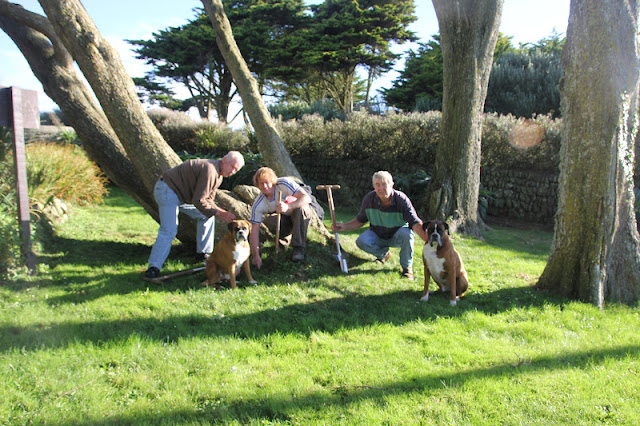 We are having a portrait of the dogs painted by David Sandell a fine artist. This is the working sketch we have approved. 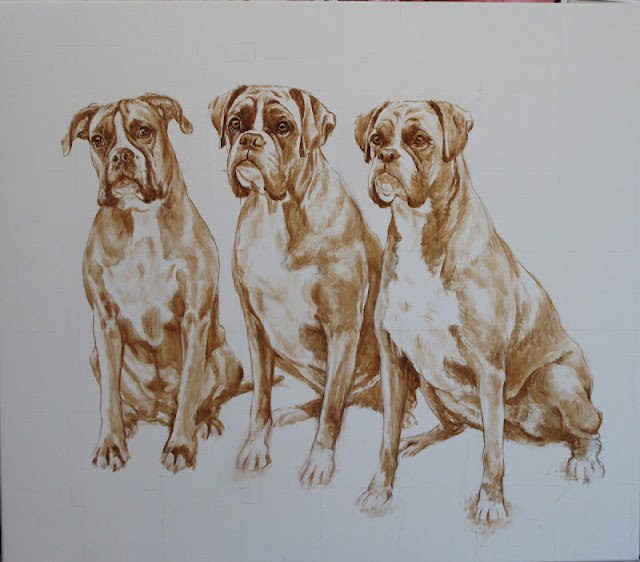 We wanted Millie included and I think that David has done a superb job working from photographs of her. He was able to sketch Blue and Poppy  from real life. He has captured each of their expressions. I cannot wait to see the painting.

Courage doesn't always roar. Sometimes courage is the quiet voice at the end of the day saying, I will try again tomorrow.

2012 has not been the year we expected. We had thought that this would be the first summer of Ray's retirement and we would have the freedom to do so many things that our working life had prevented us doing.

We gladly put our own lives on total hold and spent most of this year caring for my MIL and nursing her through what her doctors thought would be a terminal illness. Unfortunately as she regained her strength and her health improved it became impossible to satisfy the demands she placed on us. We know that a lot of this was caused by her frustration at no longer being mobile and other restraints that her illness had left her with.

Our mental and physical health started to decline with the unremitting work, stress, her constant dissatisfaction and our lack of sleep. It was with heavy hearts that we had to concede defeat and arrange for my MIL to go into a nursing home. Luckily she is at The Poldhu which is directly across the cove and is only a five minute walk away.


It was a formerly a grand Edwardian Hotel and it is still run along the lines of a luxury hotel and we know that she is being cared for in great comfort. It is very easy for us to pop in two or three times a day and Poppy and Blue are welcome there as well. We do not feel guilty but are very disappointed that she made it impossible to remain with us.

I haven't been able to pick up a needle for several months but am pleased to say that as I have caught up on my sleep and my brain cleared from the stress I did start to sew again on Sunday afternoon. Hopefully I will have some progress to show you on Victoria Sampler's Alphabet series in a few days time. 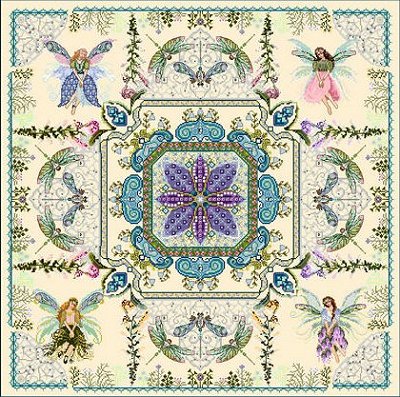 As a treat to myself I have ordered Chatelaine Designs Fairy Flower Garden  which may be my next project. I love all the beads and sparkle.

My heart has been effected by the last few months and an ECG showed that my heart beat has changed and I am seeing a Cardiologist next week. My Doctor thinks that the chest pains I have had are probably caused by stress but it is possible I may have had a mild heart attack. I am sure that all will be OK.

Now I am free to have leisure time I hope to get my camera and walking boots back out and resume
life. I also have a lot of catching up with Thistle Threads "Cabinet of Curiosities".