Life in abundance comes only through great love.


As the lighter evenings are here there has not been so much sewing. I have had a small hardanger finish, this is a dressing table mat by Cols Creations.


I made a few alterations (as always) to the pattern as I went along and also added some small gold beads.

This is the back. As I have never seen anyone else's hardanger work I am not sure how this compares but I have tried to be as neat as possible. If anyone has some good tips I would be grateful. Books never seem to cover the back of the work.


The Lace Garden is back from the framers and I have hung it in one of the guest bathrooms. 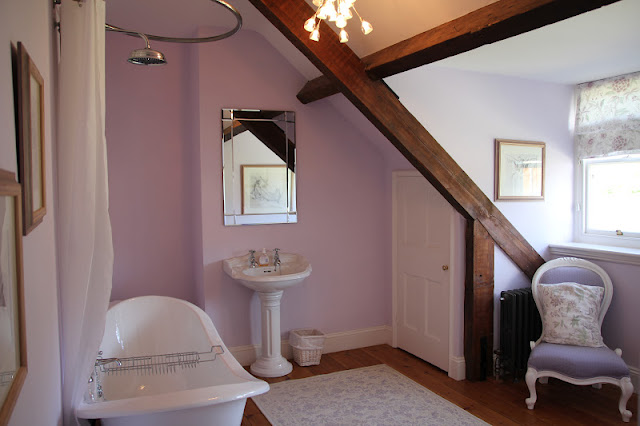 I deliberately chose the lavender mount to compliment the room which is a very feminine bathroom and has a boudoir feel.

I started Victoria Sampler's Alphabet series on April 12th and I am enchanted by the beauty of this piece.


Each letter of the alphabet is a stand alone design but they can be combined to make one large piece.
Mine will consist of six columns and four rows, X,Y & Z form one piece thus making 24 individual sets.

Each set is made up of stitches and motifs starting with the set letter. For example in  "A" the stitches include algerian eyelet lace, arrowhead stitch, assissi stitch, aglerian plaited stitch and alamance bargello. The motifs are azaleas, an ant, anemone buds, an arrow, an armadillo, alyssum buds, acorns, an axe, an arbtus branch and an apple. I am in awe of Thea's imagination and creativity. Some of my most precious projects are her designs.

There are plenty of charms and beads.


And I have added a few more along the way.


I love the use of Krenick braids.

I didn't have time before the wedding to hang Ann Medd.


So I popped her on the wall of our TV Room (a framed piece is always safer hung than lent against a wall) and I have got used to her in this position just behind my sewing armchair. I think that I may leave her here 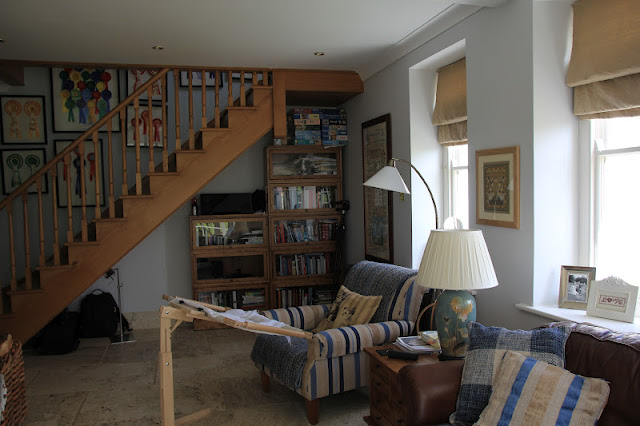 Have you spotted my new frame and stand?

I really like using my Lowery stand (which I consider one of my best ever buys) and Q-snaps but because of the beads, charms, buttons and surface embroidery on VS Alphabet Series I couldn't use the Q-snaps. Over the years I have bought every sort of roll frame but can never get the tension right on the sides of the fabric. I like the fabric to be drum tight.

Last year I read Mary Corbett's review of the Millenium Frame and was taken with the whole concept.  Check out the video.

I am bowled over by how easy it is to assemble, two or three minutes maximum and it is DRUM tight. I have six feet of fabric rolled on the frame for VS Alphabet series. I quickly ordered the stand as well and some different sized side bars.

I would rate the frame as excellent and highly recommend it.

Thistle Threads' course - Cabinet of Curiosities has started and I am so very pleased that I signed up for it.

Here are some images I have taken off the internet of embroidered caskets. I hope at the end of the eighteen month course to stitch a double casket similar to these that will become an heirloom for my family.

Chris and Kate are back from their honeymoon on Sunday, three weeks have gone by  so quickly. We had hoped to meet them at the station but unfortunately we cannot as we have to go back to Wales this weekend.

They have kept in daily contact via the "Whats App" application on smart phones. (If you haven't heard of it, it is a fantastic app to have, it costs just 62 English pennies ((under a dollar)) to download and that is the only cost involved. You can then send messages, photos, videos and voice recordings instantaneously to each other from around the world at no cost).

They have had a wonderful honeymoon and look rested and tanned.

No bird photographs (as such today) but I am very pleased to announce that we have a family of Great Tits nesting in the bird box with the infrared camera and microphone. This is linked to our TV. Our other small box is also occupied by a family of Blue Tits.

They started to build their nest nearly two weeks ago and on Sunday laid the first egg. 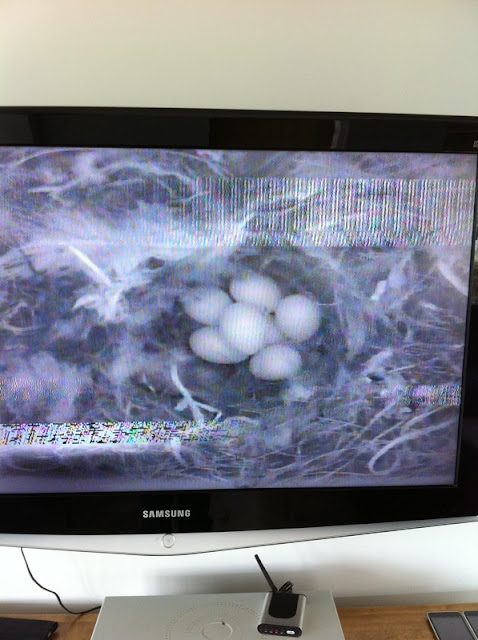 We now have seven eggs and she is still laying !!!. Apparently they can have up to eighteen eggs.

I will keep you posted on how many she eventually lays. We have had so much pleasure already watching her at work. She filled the box during the day and then in the evenings she went to work weaving the nest with her beak. It was so cute when she used her body to make the centre of the nest. A huge amount of work goes into the nest.

We have had a green spotted woodpecker visit the garden so I have now put up a woodpecker box to try and attract it to settle here. We have also been hearing owls hooting and found owl droppings so I have put up an owl nesting box as well.

Before I sign off I want to say many, many big "thanks yous" to all of you for your supportive comments. They mean a great deal to me.